OPI and tennis superstar Serena Williams announce the two final lacquers in the 2011 Glam Slam! promotion, timed in conjunction with the upcoming New York tournament. Glam Slam! U.S. features a duo-pack with two high-shine shades: shimmering red, Love is a Racket, and glittering bronze, Pros & Bronze.
“OPI and Serena return to our home country for the final launch with two bright, feminine lacquers,” said Suzi Weiss-Fischmann, OPI Executive VP & Artistic Director. “Packed with red and gold micas for intense luster, the Glam Slam! series finishes with two classic, glamorous colors.”
“Whether worn alone or with Pros & Bronze layered over Love is a Racket for a golden glow, these two shades have rich hues that are perfect for transitioning from summer to fall,” adds Williams.
Serena Williams has received the World Number One in singles ranking by the Women’s Tennis Association on five separate occasions, along with being listed as sixth on the all-time greatest champions list. Additionally, she has won two Olympic gold medals in women’s doubles and has earned 27 Grand Slam titles to date. Serena is the most recent player to have held all four Grand Slam singles titles simultaneously and only the fifth woman in history to do so.
New shades in the Glam Slam! promotion are introduced to coincide with each of the four major tournaments, including the upcoming New York tournament in August 2011. As with all OPI Nail Lacquers, Glam Slam! shades contain no DBP, Toluene, or Formaldehyde, and each includes OPI’s exclusive ProWide™ Brush for the ultimate in application.
Glam Slam! U.S. will be available beginning August 2011 at Professional Salons, including Beauty Brands, Beauty First, Chatters, Dillard’s, JCPenney, Pure Beauty, Regis, Trade Secret, and ULTA, for $14.95 ($20.95 CAN) suggested retail for each duo-pack.
For more information, please call 800-341-9999 or visit www.opi.com. Follow OPI on Twitter @OPI_PRODUCTS and become a Facebook fan! 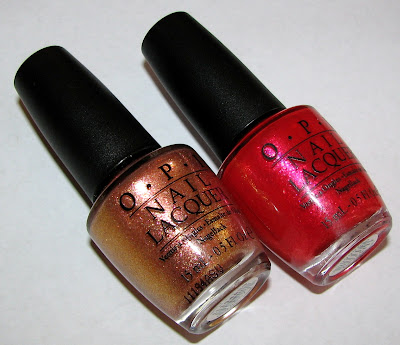 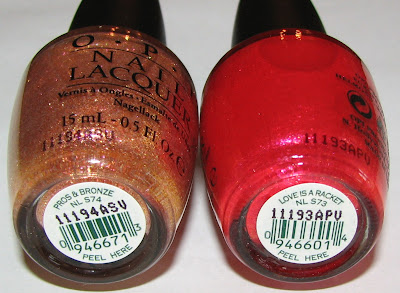 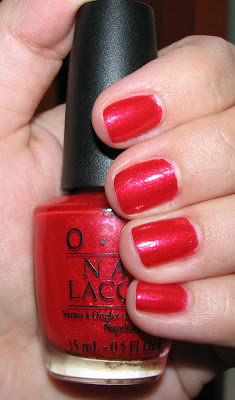 Love Is A Racket 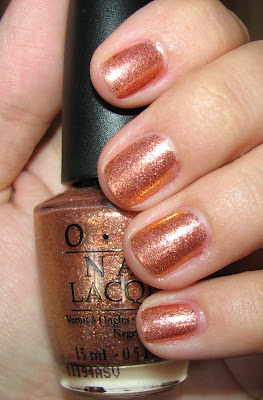 At first glance of Love Is A Racket I thought… oh Lord, not this color again. When actually.. it’s a little different. It’s beautiful to look at and makes my hand look rather dainty. It’s a red-pink with less pink in it than you’d expect. It wore extremely well, like that of 90% of OPI’s. It took 3 coats to achieve the look in the photo, but they went on seamlessly.

Pros & Bronze, while beautiful, did not wear well on me. It’s so different than anything else I own, but after about a day and a half I had some pretty noticeable tip wear. Not chips, mind you, but because it’s a peachy foil shade I noticed the wear pretty quickly. I love the color, the coppery bronzed peach with red and gold sparkles. So festive! I would have rather seen this polish paired up with a Shatter shade.

All in all, it’s likely you have something very similar to Love Is A Racket, but it sure is pretty. Pros & Bronze might be a little different, might be a little beautiful, but can you get past the quick wear? Might be better for layering.