I’m definitely on search for the worlds most awesome Turquoise polish for my piggies. Le Metier de Beaute hit the nail on the head with their shimmery Dionysus, but I still need to find a cream. Dior Nirvana is that cream.

I actually feel bad that it’s taken me this long to post about Nirvana. Nirvana was released with the Nordstrom Exclusive Dior ‘Rock Your Nails’ Collection. It released back in the spring time (I want to say March 2011?) with 5 polishes and the Dior Rock Coat Top Coat. I was not really a fan of the Rock Coat, but was lemming Nirvana like crazy. My Nordstrom had the tester out, but had sold out of the polish and there were none left nationwide. Of course =( Randomly, Nirvana popped back in stock online and I was able to get my grubby little hands on it 😉 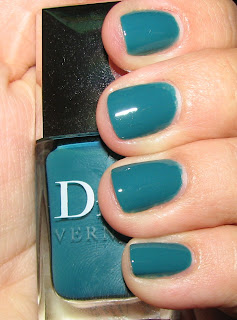 Nirvana is everything Nirvana should be. Beautiful, applies like a dream… and, apparently, not easy to find.

Dior Vernis Nail Polish retails for $21. Nirvana is no longer available, and it was exclusive to Nordstrom… BUT you can always try the forums or ebay… you could get lucky! If you can find it for retail or for a nice swap, I say go for it!

EDIT – Was perusing Dior.com and found Nirvana! I had no idea that Nordies exclusives went on their site!!! have fun 😉