For the third installment of the Serena Williams Glam Slam! series by OPI, the brand has released 3 more polishes – Grape…Set…Match, Your Royal Shine-ness and Servin’ Up Sparkle to produce Glam Slam! England. Check out the press release by clicking HERE. 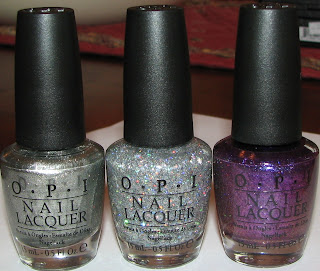 The first installment was the duo of Black Shatter and Simply Smashing. I picked up the Black Shatter (because I got the Katy Perry shades) but Simply Smashing just wasn’t my cup of tea. The second installment released was Glam Slam! France – 2 duo packs – one with Red Shatter and Rally Pretty Pink, and one with White Shatter and Spark de Triomphe. I DID want these, but by the time I got to my local OPI retailers they were long gone =( and apparently went FAST.

On to the swatches from THIS installment 😉 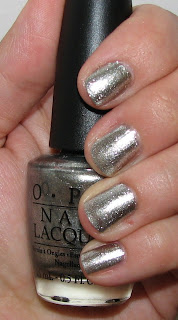 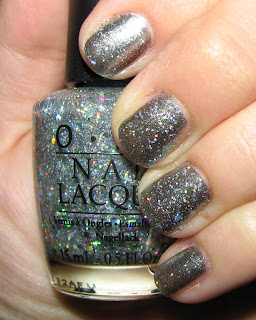 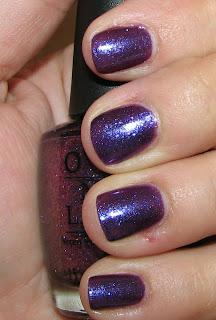 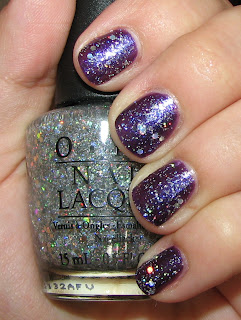 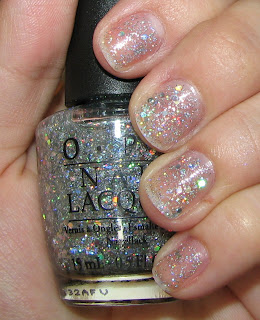 3 Coats of Servin’ Up Sparkle

I was really impressed with the pigment of Grape…Set…Match. It was good in 2 coats. I also think that Your Royal Shine-ness would have been good in 2 coats too, if I would have put it on a little thicker. Grape…Set…Match is unique to me, because it was a different color every way I looked at it. However, it’s not a duochrome. It’s hard to describe, but sometimes it looked blue and sometimes it looked purple. Let’s just call the color Lapis 😉

Servin’ Up the Sparkle… well what can I say? It’s beautiful. I’m sure the minute you saw the first picture of it, you thought the same. I want to wear it on every single mani I do. You’ll get A LOT of glitter with each coat (which is impressive because glitter top coats always seem so sparse to me), and it actually even looks nice when worn alone, which is what my mani is right now.

I’m excited to see what is in store for the fourth installment, to be released in conjunction with the US Open.

These duos can be picked up starting June 2011 at Professional Salons, including Beauty Brands, Beauty First, Chatters, Dillard’s, JCPenney, Pure Beauty, Regis, Trade Secret, and ULTA, for $14.95 ($20.95 CAN) suggested retail.

***Products were provided by the manufacturer or PR firm in exchange for an HONEST review. For more information, please see my Disclosure Policy.