On Sunday, after hubby made brunch and washed the kitchen floor, (isn’t it awesome that after you get married all you want is your kitchen floor washed?! It’s my most HATED chore so I’m SO happy he did it! Best hubbster ever!) and my daughter was napping… I decided to take a little mommy time and hit Ulta.

My Ulta is about 30 minutes away and REALLY hard to shop at with 2 kids in a double stroller. Navigation isn’t easy, plus it’s in a plaza type thing outside of the mall so to park and work the double stroller over there is no small feat. I rarely get to go and thought Mother’s Day was the perfect opportunity to weasel some time for me 😉 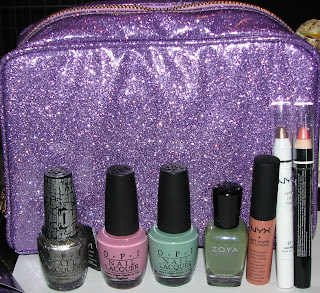 Yes, that is the Urban Decay Quinceanera Bag. Seriously, I’ve loved it since I first saw it online. I thought I could wait til Sephora put it on sale, I really didn’t think it would sell out, since $26 for a makeup bag is a little… hrm. High. This bag is REALLY beautiful, though. You really need to see it to believe it. The interior is HUGE. I’ll stop trying to justify this purchase, and I’ll do a separate post on it later 😉

I had NO idea the OPI Pirates of the Caribbean collection had launched there. It looked like they just put it out that day, there was a ton of Silver Shatter (probably trying to keep up with the demand that was Black Shatter) but not so much of the colors. I got the last Sparrow Me The Drama. In addition to the Silver Shatter and Sparrow Me the Drama I also grabbed Mermaid Tears. The other colors weren’t all that WOW in person, and my budget isn’t unlimited.

And for SOME reason my Ulta had a few Zoyas! They had 3 from the Intimate Coll, and then a few that were just random and summery (though none from the new summer collections that just came out). GEMMA was there! My #1 Zoya lemming!!!

And of course NYX! I really want to expand my NYX collection and bring you more of that. I’m extremely impressed by what I’ve seen of their products so far. On this trip I picked up Stockholm Soft Matte Lip Cream, Jumbo Lip Pencil in 716 Brown (which is weird, because it looks Coral to me…), and Jumbo Eye Pencil in 617 Mocha.

In the coming weeks I’ll be doing swatch photos and reviews of all of these products, so be on the lookout for that!

I hope you all had a GREAT weekend, and to those who celebrated, a great Mother’s Day!!!

Shop Maxi, Skirts, Panties Thong, Discover: Workout to Wherever and more. Get this widget.