My first butter London! You know I’m so smart (sarcasm) that when I’d hear of butter London on the MUA boards I would think “damn thats a pretty polish, too bad it’s only in London” =\

I was HAPPY to realize I could grab up some butter London’s at Nordstrom!! The brand is “3 free” – From the Nordies site:

“What is 3 Free? butter LONDON is a 3 Free company: no formaldehyde, no toluene, no DBP (dibutyl phthalate). This luxury nail lacquer is high-fashion, heavily pigmented and safe. butter LONDON believes in rock ‘n’ roll. Great Britain. And Fashion.”

On to the polish. I’m not a fan of the actual base color… the lighter taupe gets lost on my skin tone. I think it looks a little weird on me. The shimmer dust in it is GORGEOUS, though. The brush isn’t my favorite, but it went on smoothly and easily. The polish dried nicely, though was a bit patchy even after 3 coats. I don’t regret the purchase at ALL, but I do wish I’d have went with a different color. I jumped on All Hail because I’d been lemming it for awhile after I’d seen the initial swatches. It’s listed as a holo, and you can see that better if you click the pic to enlarge…. I’ve also read that it’s other name is “All Hail McQueen” as a tribute to Alexander McQueen. 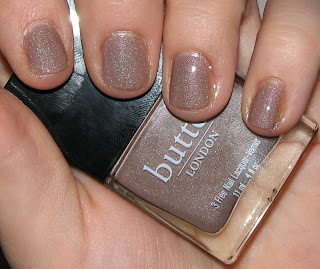 It’s my first butter London, but definately won’t be my last. On my wishlist? Victoriana, Aston, and Rosie Lee!