Today I decided to finally bust out the Urban Decay 24/7 Eyeliner Set. This set has been released for Spring in honor of Urban Decay’s 15th Anniversary. It includes 15 shades of eye liner, 6 of which are exclusive to this set.

Lets first deal with the elephant in the room. The price tag. Yeahhh I know $92 SOUNDS like a lot… personally after I did the order I almost cancelled it, because it made me feel sick. But after I got them here and swatched everything I am TOTALLY in love and happy with this purchase. PLUS these are FULL size liners! Normally each would retail for $17 plus tax, plus the sharpener (which I’ve read excellent reviews on) is $9 too!

Below I’ll start with some pics of the packaging and liners, after that we can move on to the swatches 😉 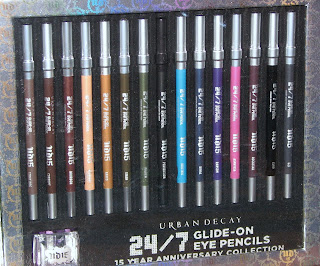 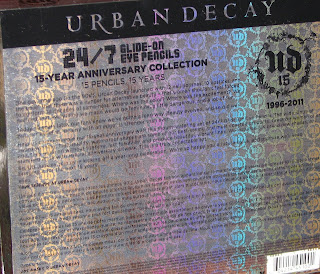 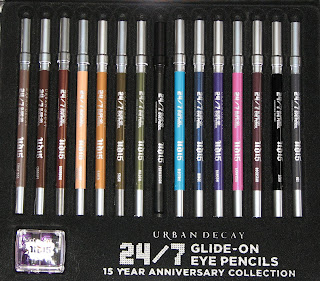 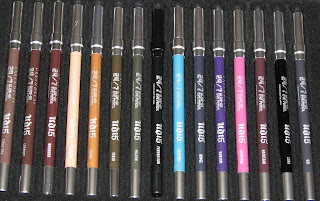 Packaging, obviously, is gorgeous. I love how the box opens and everything has it’s place. There is shrink wrap around the black part that holds the pencils, and in my frenzy to get everything open I broke it =( You can’t tell, but it makes me sad lol The case also magnetically shuts, which I love because it’s just fancy. Who doesn’t love fancy?

The 15 swatches below are in the same order (top to bottom) as they come in the box. For referance, the swatches below (from top to bottom) Stray Dog, Corrupt, Bourbon, Midnight Cowboy, Baked, Stash, Mildew, Perversion, Electric, Binge, Ransom, Asphyxia, Rockstar, Zero, and Uzi:

Urban Decay Glide-On Eye Pencils literally DO glide on. And they STAY on. After I did these swatches I tried soap, water and elbow grease and they didn’t even fade! MAC Bulk Wipes helped, but in the end I had to bust out my makeup remover. Only thing to watch out for, they are soft. I wasn’t even pressing hard and Stray Dog lost it’s tip.

Four of the exclusive shades are HG material. If Urban Decay would make Stray Dog, Corrupt, Midnight Cowboy, and Uzi perm, I could die a happy woman.

The Urban Decay 15th Anniversary set retails for $92 plus tax (USD) and is available at UrbanDecay.com and Sephora.com.

Are you using Squalane or Squalene? Not sure what

I threw my back out DUSTING. 😒 DUSTING, you guy

Get the Look! @disneymaleficent Mistress of Evil I

A look at how #IDecocrated for Winter! Swipe for m

This error message is only visible to WordPress admins


Error: API requests are being delayed for this account. New posts will not be retrieved.